We left Medan, Indonesia with Tom and Tracy on the 8th of June with Tracy suddenly feeling ill while we were waiting to board our flight to Penang, Malaysia.   We thought perhaps it was food poisoning from lunch.

The next day in Penang the four of us took a bus tour of Georgetown.  Tracy was feeling better but Tom was feeling poorly.  We thought that they both were dealing with fatigue after their intense ride through Indonesia.

June 10th, time to pick up the bikes. The bikes were in perfect condition. Were we ever pleased that the voyage had gone trouble-free!

Tom and Lindsay spent the day getting the bikes cleared through Malaysian customs, but Tom was still feeling really drained.  So much so that that evening he had to leave an amazing tandoori meal with friends, one of whom (Fazil from KL) had just returned from a solo around the world ride and had his bike on our vegetable boat. 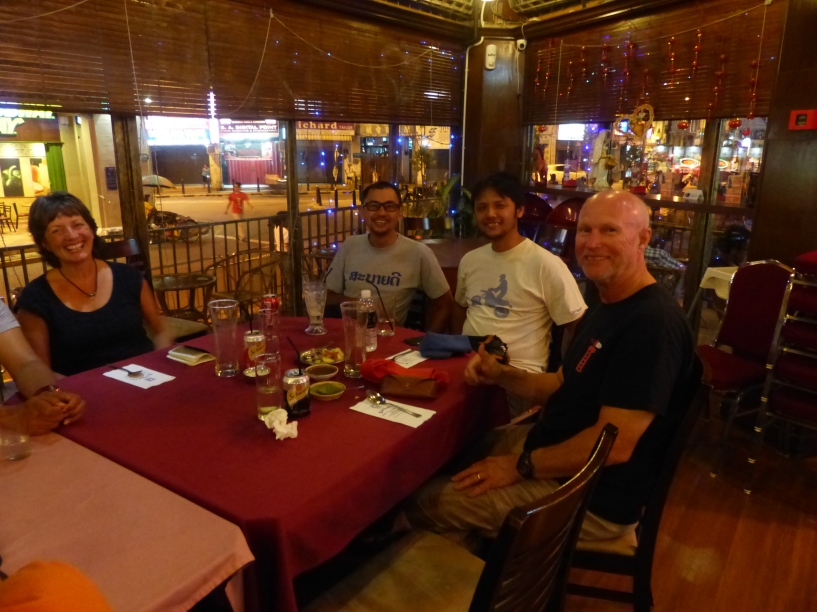 We postponed leaving for Thailand until the 12th hoping that all would be well by then. But that morning as we packed our bikes, Tom and Tracy decided they would catch up with us in Thailand as Tom still needed some down time.  So we left for Phuket to wait for them. The border crossing into Thailand was really busy with bikers going to a big rally just over the border and it didn’t help that it was pouring. Riding in Thailand proved to be such a nice change from Indonesia due to so much less traffic and better road conditions.

We headed to Phuket which we had visited in 2001. We were anxious to see how Karon beach had recovered from the terrible Tsunami of 2004. We certainly saw a lot of change and hopefully for the locals very positive. While in Phuket we got the terrible news that both Tom and Tracy had contracted Dengue Fever and had been admitted to hospital. They ended up there for a week, and then were instructed to take several weeks of down time before riding again.

This left us with some difficult decisions to make as we were dealing with time issues for travel in Mongolia and Russia.  Things had already been delayed in Australia, and now we were not certain how long it would be before Tom and Tracy would feel strong enough to continue.  Also, there was the uncertainty of them getting a Russian visa, as all our research showed that as a result of rule changes, UK citizens could not get a Russian visa outside of their home country, although the possibility existed in Phnom Penh. We considered completing the journey by ourselves, but as we were about two months behind in our plan, it meant that we would have to rush through Mongolia and Russia, something we did not want to do.

So the four of us decided that all signs were pointing to home.  We enjoyed the ride up to Bangkok via Hua Hin and spent about a week in Bkk before shipping ourselves and the bike home while Tom and Tracy waited out their time in Penang.  Funny thing was, although we planned our flights home independently, we both flew home on the same date!

Although our voyage came to a premature end and we did not get to ride through Mongolia, Russia and Europe, it really had been an unforgettable experience. The actual riding was incomparable with any other trips we have done. The scenery, especially in South America, was spectacular. Everywhere we rode we were met by the friendliest people and never did we feel in danger or threatened in any way. The days were not all easy, as weather, poor road conditions, insane traffic and getting lost kept reminding us that this was “adventure riding”. The good days vastly outnumbered the bad. All told we had been on the road for ten months and had put 54,000 kms on the bike.

We are currently drawing up plans with Tom and Tracy to continue our jouney where we left off. We are looking at flying ourselves and the bikes from Vancouver to Korea and then take the ferry to Vladivostok where we will ride to the Lake Baikal region in Siberia and then through Mongolia, Khazakstan, the ‘stans and the rest of Russia to Europe. This is planned for late spring 2018 as Lindsay has to go through two hip replacement operations in the meantime.