After a good two months in Australia it was time to transport ourselves and the bike to Bali, the gateway for our journey through Indonesia and SE Asia. 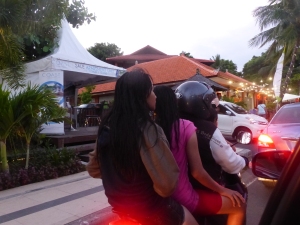 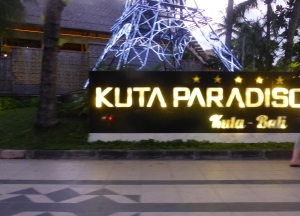 First stop was Kuta, where we stayed for a week while waiting for the arrival of the bike. For the most part the town and the beach were very quiet, as we were on a shoulder season, but on the weekend the beach filled with locals as well as tourists to watch the sunset. 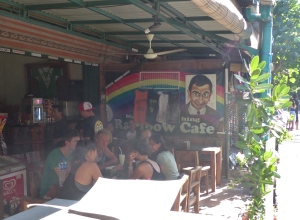 The bike arrived on the Friday, we picked it up at the cargo area of the airport, and with the incredible help of the people that worked there got the bike uncrated and restored to a two wheeler, and we were off.

Stops along the way to catch the ferry from Gillimanuk to Ketapang. 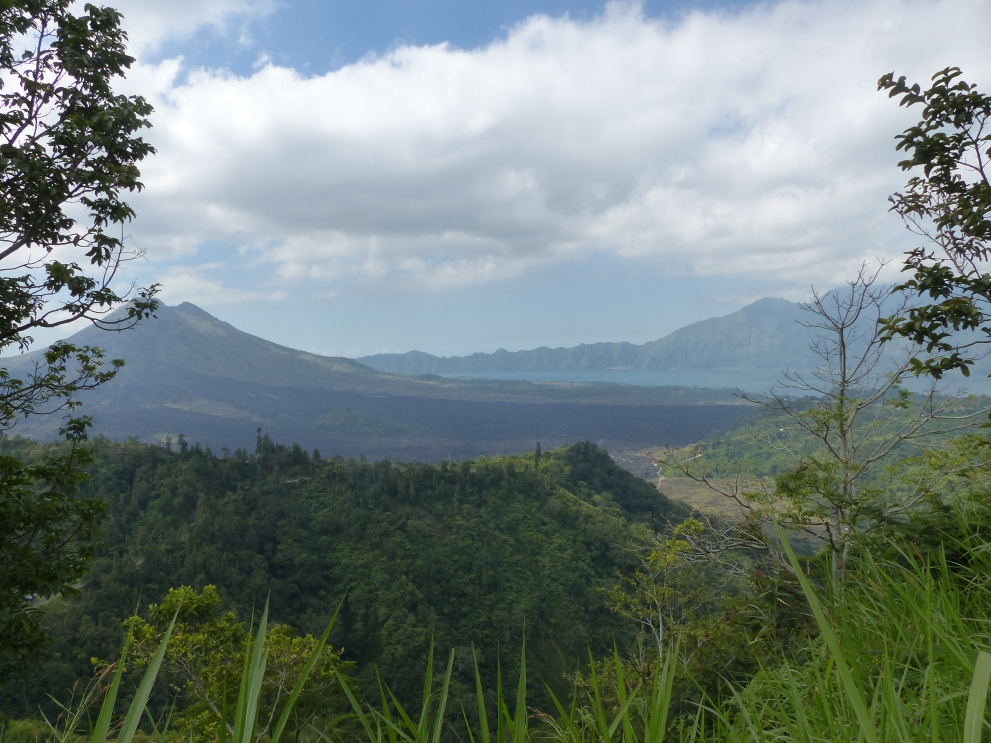 We arrived at the ferry to Java and were issued onto a waiting boat in a hurried manner, with us not confirming that we were indeed taking the right boat.  As we were nearing Java the boat was navigating away from the port we were scheduled to dock at.  We began to think that we had boarded incorrectly…..but it turned out we were just lining up a distance away to wait our turn to dock…..almost an hour wait!

After spending a couple of days in the Banyuwangi and Genteng area searching out family history we made our way to Bromo.

Once again the scene that met our eyes matched the hype it had received.  After enjoying an evening meal looking out at the volcano we made our way to our very small and rustic room in the complex that was built right on the craters edge.  We had noticed the room had an odd smell to it, but we accounted age as the culprit.  But as we were settling in for the night the smell became worse and ultimately unbearable.  Lindsay went outside to check what the atmosphere was like, and sure enough, we were engulfed in sulphur fumes from the volcanic discharges.  When we got up in the morning the atmosphere actually burned our nose and throats.  Once the mist had risen,  a couple of hours later, the air quality improved greatly. 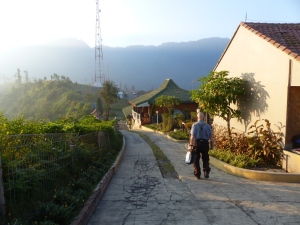 After some exploring it was time to move on to Surabaya to meet an old family friend and delve into a bit more family history.

The ride to Surabaya was uneventful until we stopped at a rest area just off the toll road. We were hot, very thirsty and not too sure where we were going in Surabaya as we could not access the internet in Bromo before we left.  We pulled up to an A+W. ready to quench our thirst and access their free wifi.  As we were parking, an attendant approached us and said we could not park there….we asked, where then….he said, we weren’t allowed to park anywhere at the complex as motorbikes are not allowed on the toll roads!!!  OK, we were in shock….now what to do.  Of course everyone turned out to be very generous when they realized we had no idea where we were in relation to our hotel and we were dying of thirst, so they gave us time to access google earth and quench our thirst with a Root Beer before we had to leave.

The next hurdle came as we approached the toll booth to pay our completed passage, once again people didn’t know what to do with us.  After some laughter on their part and then discussion, it was decided one of the attendants would lead us via an unused road to enter Surabaya.  He guided us down a very new and very empty artery to the proper access road for motorbikes.

We spent three days in Surabaya enjoying some of its history and art before leaving for a look at Krakatau via Surakarta, Yogyakarta, Tasikmalaya, Bogor, Cilegon and then Anyer. 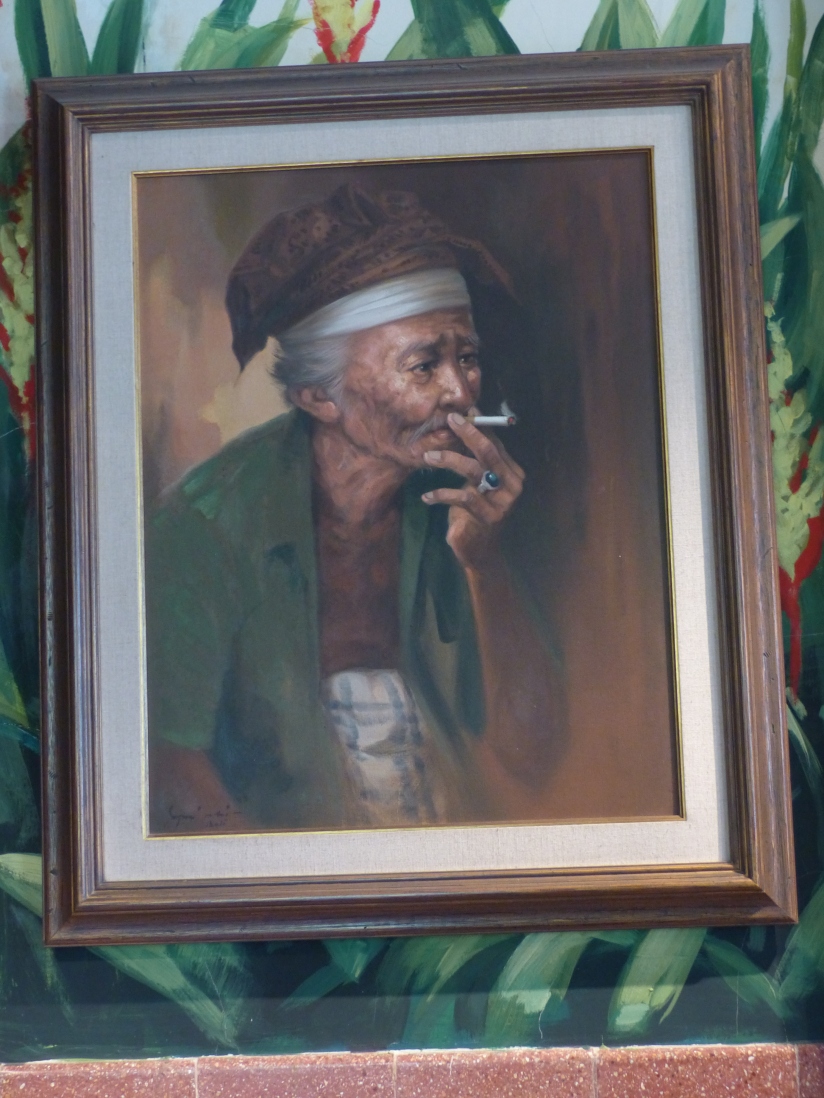 There were many incredible sites enroute , but for the most part Lindsay had to give the road 150% of his focus as traffic intensified as we left the Surabaya area growing into sensory overload as we neared the outer reaches of Jakarta.  There was so much going on, both on and along side the road, it was even difficult to take pictures as one scene just melded into the next.  But here are a few visuals from our ride through the rest of Java on a mainly two lane roadway that was the main thoroughfare for commercial, local and general travelers. Our pit stops were taken at Indomarts as the parking was easily accessible, the refreshments were cold and the conversations were friendly. 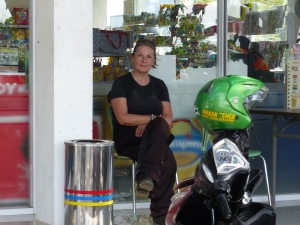 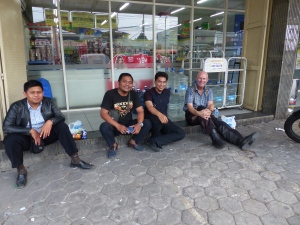 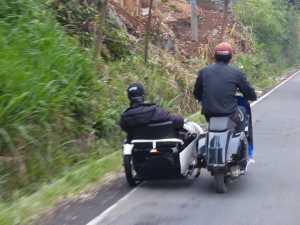 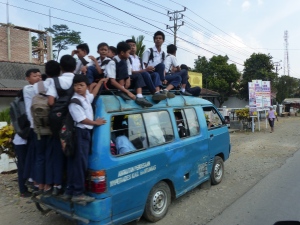 First police check in Indonesia, as we were leaving Java. 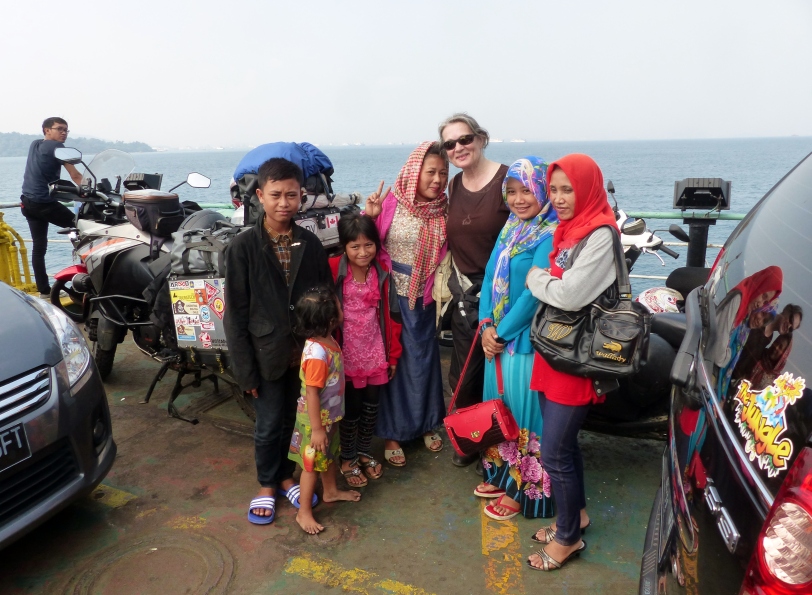 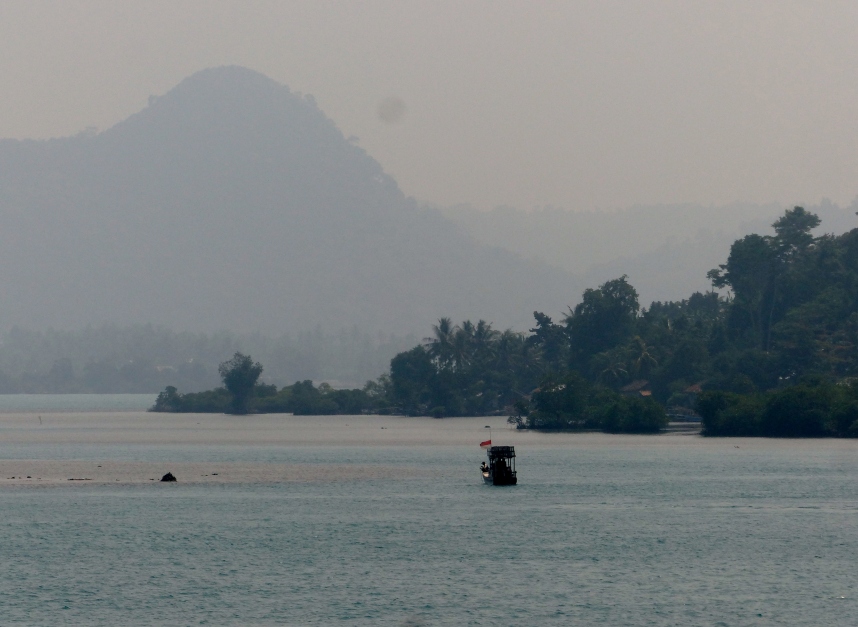 Throughout Indonesia there are “self-appointed” traffic cops, parking attendants and flag persons. They really do control the chaos and are paid by passing drivers – bikers exempt!

Although the riding in Sumatra was not as difficult as in Java, because of the long distances between accomodations, the days were long and tiring, with the constant 35 deg heat and very high humidity not helping. 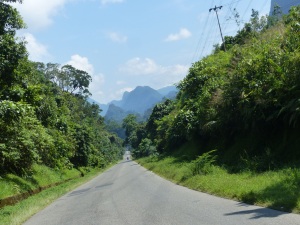 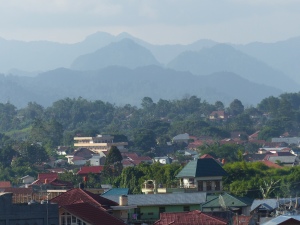 We rode around the southeast corner of  Lake Toba, the largest volcanic lake in the world. It occupies the caldera of a supervolcano which erupted about 70,000 years ago and is  the largest known explosion on earth in the last 25 million years; impressive!

The only way to get bikes from Sumatra to Malaysia, other than by air, is by vegetable boat. These boats sail between Belawan and Penang Malaysia once per week and take about 24 hours – weather  dependent. It takes a leap of faith to hand over your treasured bike on the dock!!

And once again we are on our way…..next stop Penang.