It is the 31st of January and we are enjoying some off road time in el Calafate, Argentina.  We are quite far behind on the blog so have decided to start in the present and work on the missing bits in the background, posting them as they are completed.

As some of you know Lindsay and I have been travelling without our travel companions, Tom and Tracy since Antofagasta Chile, as the back drive on their BMW blew out on the ride from Iquique to Antofagasta.  The plan was for them to get the bike fixed in Antofagasta while Lindsay and I travelled to La Serena to have the blown fork seals repaired on our bike. We offered to wait there for them, but they thought we should keep going and they would catch up to us, that was Jan 11. So after their many trials and tribulations we all reconnected last night, Jan 30, here in Calafate.

Lindsay and I crossed from Chile to Argentina on Jan 17th leaving the beautiful wine region of Los Andes, Chile behind and climbing through the Passo de la Cumbra with it’s 29 switchbacks (numbered), into Aconcagua National Park and into the lineup at the border crossing. 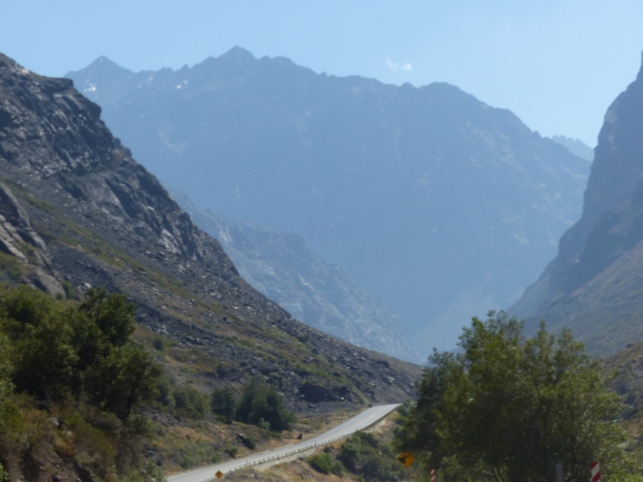 Once again we encountered the joy of border crossings.  This time is was a simple bureaucratic issue that caused us to endure a 2.5 hour crossing  It turned out there is a reciprocity tax charged to Canadians entering Argentina.  That was painful enough, $92 American per head, but the big issue was there was only one official to process the tax and he was busy processing bus loads of tourists, so we waited.

The site that greeted us as we exited the border crossing made us thankful that we were entering Argentina and not exiting it.  We estimated the line up of cars waiting to get into Chile to be 3 km to 5km long. Shortly after passing the endless lineup we were greeted by the beauty of Rio Mendoza Valley and made our first stop at the Puerte del Inca stone bridge. 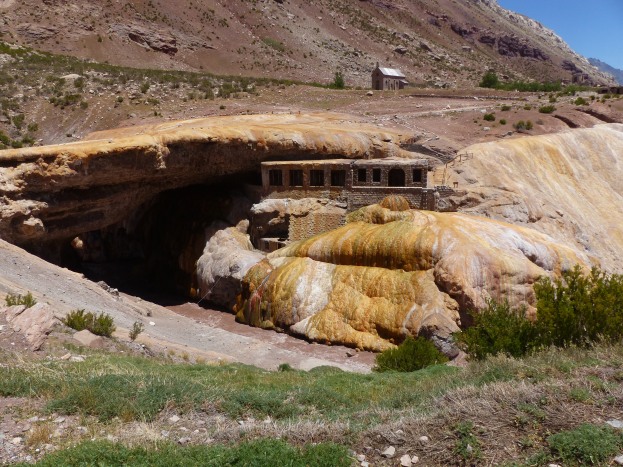 Next stop was in the beautiful city of Mendoza, center of Argentina’s wine district, sheltered from it’s arid surrounding by boulevards lined with lush avenues of trees.

Outside of Mendoza we passed Volcano Tupungato which reminded me of a floating Buddha. 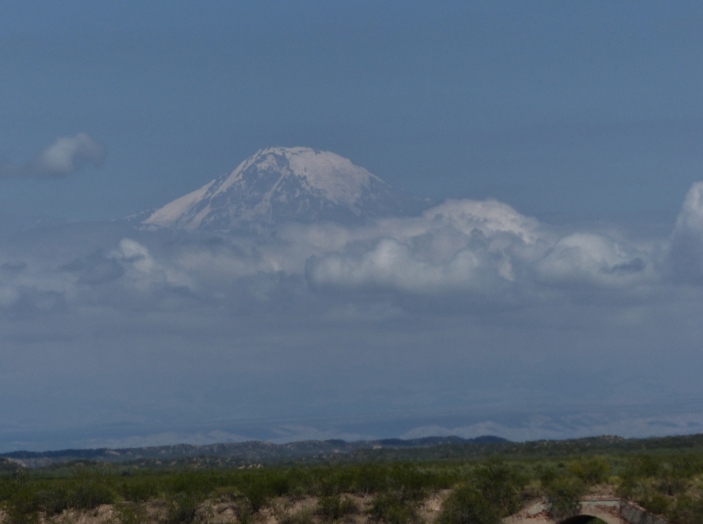 We were now experiencing the winds of Patagonia while riding  the wide open plains from Mendoza to Malarque.  We settled into our hotel in Malarque and enjoyed our first bite of Argentinian beef.

The following day found us on gravel for about 100km of the ride to Chos Malal.  The first 40km was a construction zone, our least favorite type of surface as it is generally thick gravel that has just been laid to create a new detour, leaving a very loose driving surface.  This was accompanied by winds.  Fortunately the last 60km was a typical gravel road, much easier riding with the exception of the washboard being hard on the bike. It was nice to get back onto ashphalt. 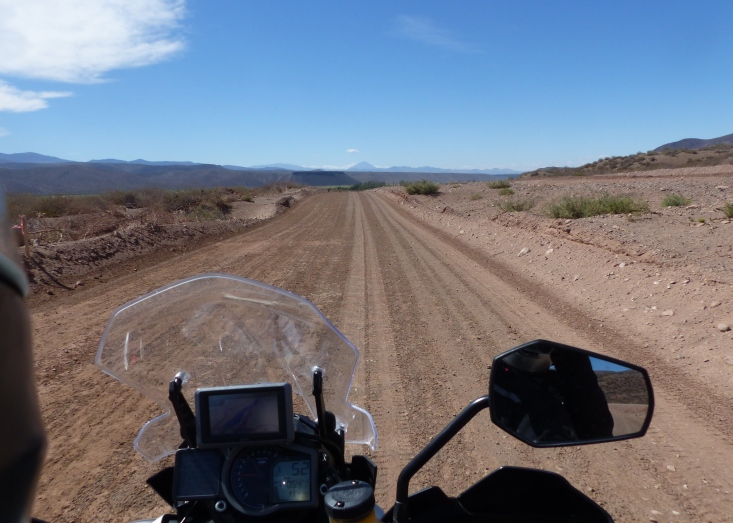 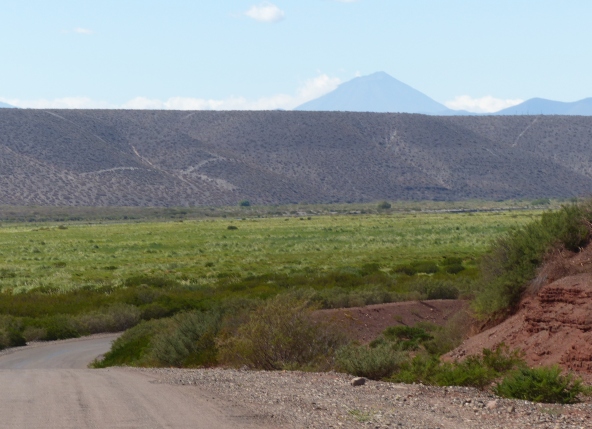 Our rides were being defined by the mountain framed windswept plains of Patagonia.

After riding the plains for a few days we found ourselves dropping into the lush Lakes District of Argentina. 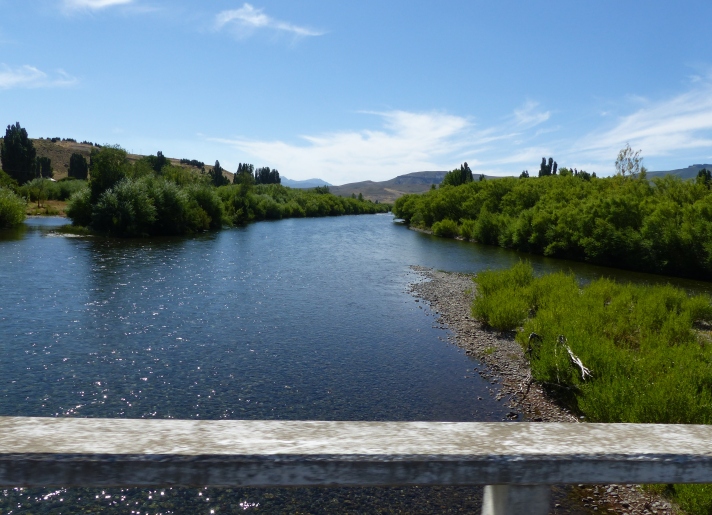 First stop in the Lakes District, San Martin Los Andes. We located the municipal campground and set up camp.  It was fabulous to be part of such a vibrant tenting community.

On the way to Villa Angastura. The road still presented a few challenges, but well worth the effort. 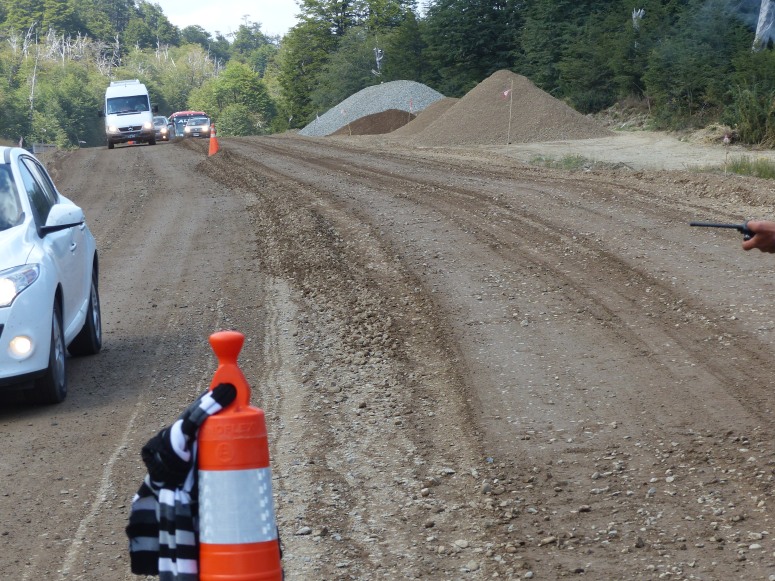 Got into Villa Angastura and checked into a campground, only to find that our tent poles had been lifted from our bike.  I know, you are thinking we probably forgot to pack them, but we checked our morning departure photos and they were strapped onto the bike.  Unfortunately we did not have a clear line of vision to the bike when we had breakfast in San Martin that morning, and we think that whoever pulled them off the bike didn’t know what they were getting and just took them because they were accessible.

Lindsay went into town to see if he could get a new tent, but they only had the the sleeve design. So after some thought we decided it was early enough to get back on the bike and make our way to Bariloche to see if we could find a tent there.   We were literally blown into town , the winds were howling off the lake .  We found our way to the town center and started our search for a tent.  Well we lucked out.  Lindsay, through a few karmic contacts. was directed to a sport shop, Garmont, where there was a possibility of buying the replacement posts for the tent. It turned out that the shop didn’t have exactly what we needed, but the owner, Santiago, assembled a whole new frame for us.  He was incredible. So we were back on the camping trail while riding through the Lakes District.

After San Carlos Bariloche our next destination was el Chalten to see Mount Fitz Roy. First stops enroute were Esquel and Perito Moreno.

It didn’t look like much, but the common area had the best music from the 60’s playing and good wifi.

Our campsite in Esquel, an indication of how windy our driving conditions were that day.

Left the next morning thinking that we would be camping in Rio Mayo.  We had read that there was a decent campground there.

We had heard and read many different versions of the road condition to Rio Mayo, but what we found was mostly paved with the last 70 or so km under construction, soon to be fully paved.

As we rode into Rio Mayo our hopes of finding a decent campground diminished.

No photos of the campground, but they too were run down and inhospitable looking.  So we decided to ride on to Perito Moreno.  This time we lucked out with road conditions as we were expecting about 100km of gravel, only to find the highway paved after the 3km gravel exit from Rio.

Found a good municipal campground in Perito Moreno, winds were still our friend and there was a religious celebration going on in the outdoor common area with lots of singing and story sharing.  We got the tent set up and picked up a few snacks for the evening meal.  While we were settling in a group of Brazilian riders rode in.  Soon after Lindsay was sharing information with them. 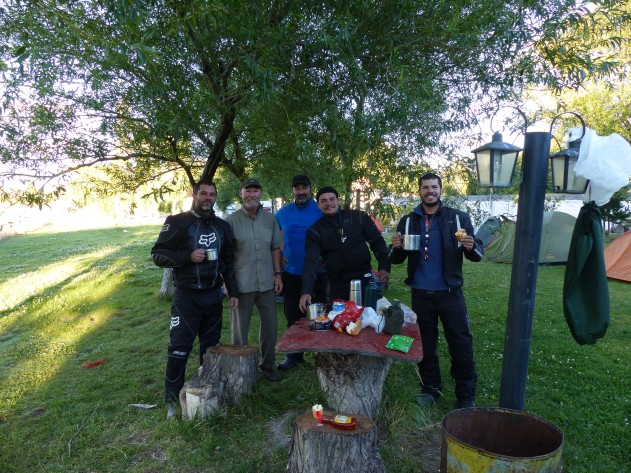 Heard from Tom and Tracy via email during breakfast at a little café in town.  They were back on the road and about 7 days behind us.  After breakfast we started our ride to Gobernador Gregores our overnight stop en route to el Chalten. Roads were good all the way but again very windy.  Pretty sure that there is no Patagonia without wind…..just varying states of it. 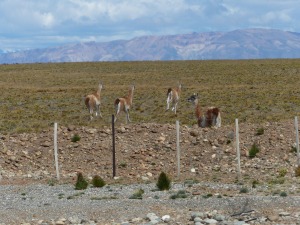 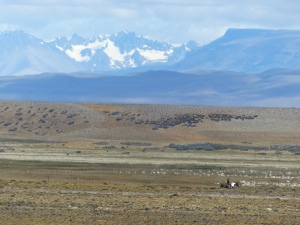 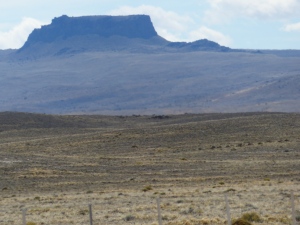 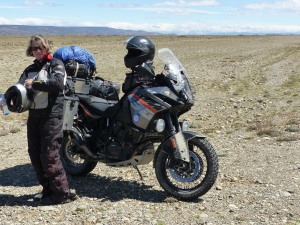 Arrived in Gobornador Gregores low on cash as ATM’s in Argentina were not inclined to give chip cards money and we found that in the small towns many gas stations, hotels and restaurants wanted cash. We were sure that Gregores was a large enough center for us to find an international atm.  Not so…..once again the ATM did not like our card, but fortunately we could use credit for gas.  Next we looked for the campground, it was sketchy,  so we decided on a hotel.  Found the hotel, no credit taken, only cash.  So there went our last Argentinian pesos.  We managed to purchase some food as the supermarket took credit, but would not give cash with the purchase.  We decided we would be ok in the morning when the bank opened as we had some Chilean pesos that we could exchange.

We arrived at the bank right at opening along with about ten other people. After a 45 minute wait the sole clerk serving clients said sorry, there was nothing he could do for us, as he stood there counting thousands of pesos.

Next option, plead my case to the manager, a professional looking young woman.  She listened patiently then explained there is simply no way for the bank to either give me money on my card or exchange the Chilean pesos for Argentinian ones.  I explain we are on our way to el Chalten and the likelihood of being able to purchase either gas or food on credit seems to be highly unlikely. She agrees wholeheartedly.  Finally after a bit more pleading on my part she offered to purchase some of the Chilean pesos from her personal funds.  Great relief, thank you’s and we are able to leave Gobernador Gregores.

We left Gobernador Gregores with rain clouds looming in the distance, so we geared up hoping  the rain would bypass us.

As we approached our route, a dirt road, we realized that we had just missed the rain and were feeling pretty lucky. Then we noticed a grader in the distance turning the road, taking advantage of the soft conditions to level things.

And this is what we found. 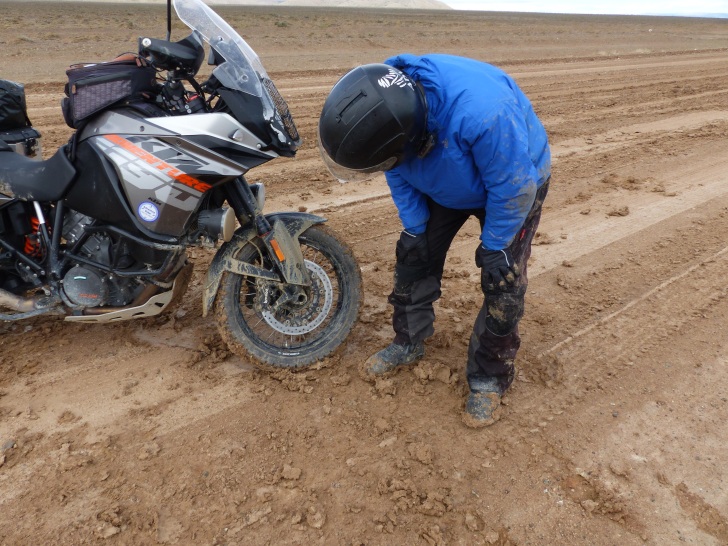 The road had turned to mud that was so sticky it had collected between the front tire and the fender resulting in the wheel seizing and chucking Lindsay…..luckily Marian was a spectator at this point as it was a ‘test’ run on the new surface. Well our spirits were deflated, especially since the grader had passed us and was now coming towards us working the other side of the road.  Marian was thinking the only way out was to walk, and even that would be difficult as the mud was caking on our boots making walking almost impossible.  Of course Lindsay said ‘no way’ to walking.

As we were removing the fender and cleaning up the tire two bikes came cruising over the horizon.  Our jaws dropped!  As they approached they rode over the mud on their street tires then came to a halt.  They told us the road was in good condition, we just needed to get past this part, and we noticed that where the grader had passed earlier on the other side of the road things were already drying out, no caking on their tires.  We were hopeful.  Lindsay got the bike back together and off we went, knowing that the road was passable.

Reaching the end of the worst of it. 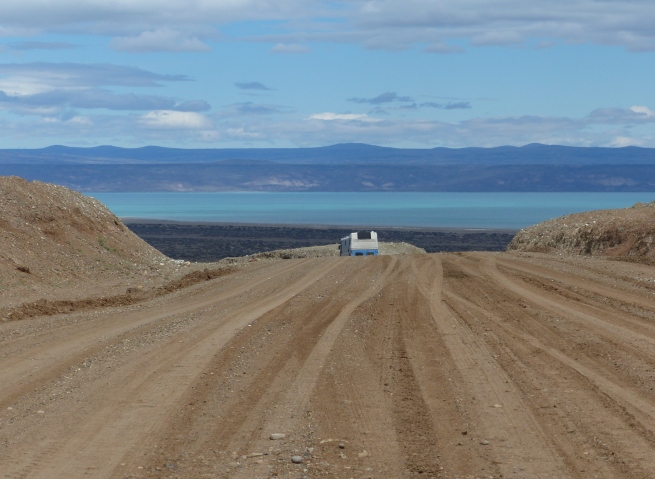 81 km later putting air back in the tires as we reach pavement.

Next challenge, finding gas in Tres Lagos, a pinpoint on the map.  We luck out, there is gas.

A popular stop….thinking we should get a 2up sticker made up. 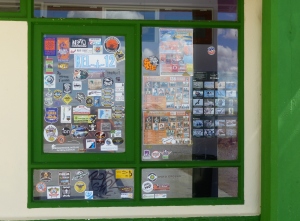 After all the mud, gravel and ever present wind we are rewarded with a glimpse of what was to come. 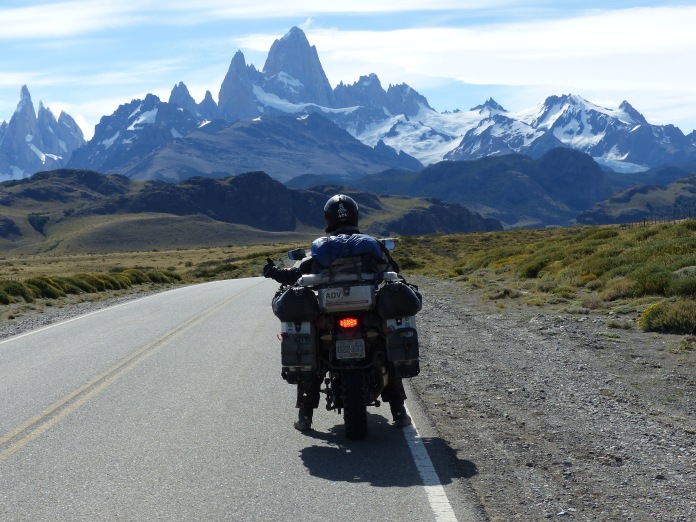 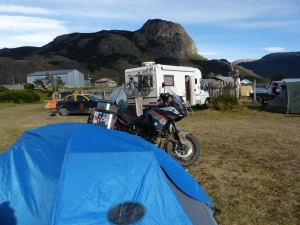 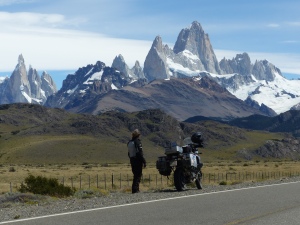 We stayed in el Chalten for two days with winds whistling through the town and campground all day long, while evenings brought calm star and moon filled nights.

We left el Chalten for Calafate on Thursday Jan. 29. ……

Will pick up the thread next blog.

p.s. Congratulations to Kevin and Lia on their recent engagement.  We are thrilled.