It’s been awhile since our last entry but both Lindsay and I have had the flu which has left us with very little energy at the end of a day to keep the blog up to date.  I am basically over my bout and Lindsay seems to be over the worst.  So we are covering a lot of miles with this entry, making details sparse but hopefully giving you a glimpse into our last few weeks.

We were in Oaxaca Mexico a few weeks ago en route to San Cristobal.  We stayed at the Hotel Helena, close to the central square.  The square was incredibly busy, a tent community, where all the merchants slept next to their stands.  It was impossible to see the square in it’s entirety because of this, but we took our meals under the arches and became part of the ‘busy’ environment…..street vendors approaching continuously while we ate. 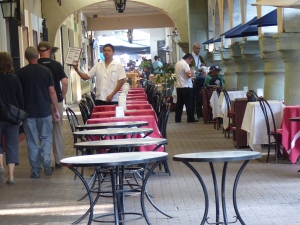 After Oaxaca we made our way to Juchitan.  We continued our drive on Ruto 2010, a beautiful road that winds high into the mountains cutting through many small picturesque villages.  Riding conditions were perfect, clear skies and cool.  As we dropped into the lowlands at the end of the day the temperature rose dramatically into the low 30’s with a jump in humidity.  We arrived in Juchitan around suppertime.  It was a busy little place with no apparent good place to lay our heads.  Tracy and I did a some searching but could find no accommodation. Again as luck would have it Lindsay and Tom connected with an English speaking man that directed us away from the center to a little hotel just outside of town.

Then it was on to San Cristobal via a toll road which was incredibly busy…we were glad to get into town by 6:00.  We found a little hotel where we could park our bikes out front during the day and bring them into the lobby area at night We got caught up with the blog (last posting),bike insurance, banking, gps etc….which took up most of our time  as our wifi connection was poor as we ran into all sorts of bureaucratic issues.  On top of that there was a music festival going on in the square a couple of blocks away which didn’t shut down until about 4:30 am each morning…..needless to say sleep was fleeting.  By the time we left the city I was exhausted and feeling like I was coming down with something.  Sure enough in a couple of days I was flat out with the flu. 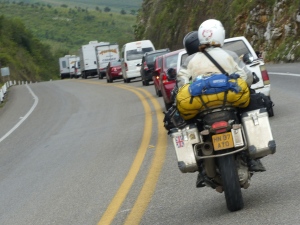 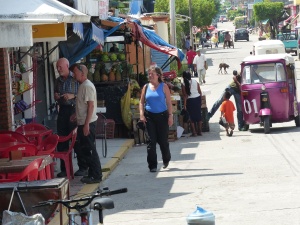 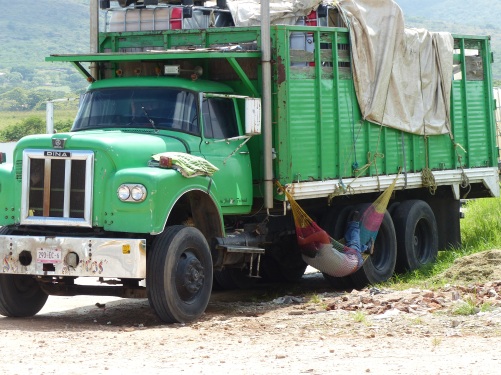 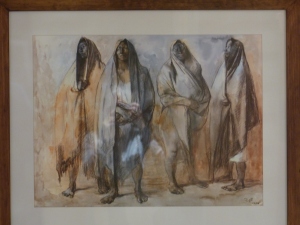 After three days in San Cristobal we crossed the border from Mexico into Guatemala at La Mesilla.  It was raining when we crossed and it all went without a hitch….although border towns always seem hectic…money changers, crowds hanging out, officals moving you through and a lot of “lurkers”, bike disinfecting.

It was good bye to Mexico.  We had an amazing ride through.  It wasn’t without it’s difficulties both technically and culturally, but on the whole it was a very rewarding experience.  We didn’t realize how incredibly beautiful the countryside was and how helpful the people would be. 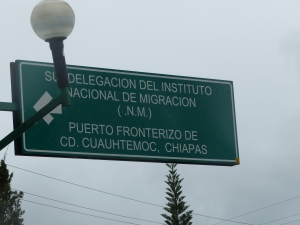 Into Guatamala. Once we were through all the craziness of entering the bike into the country and driving through all the hectic vendor stands we entered a stunning mountain pass.  The road was incredibly busy and we became aquainted with Guatamalan buses….colorful, full of people and driving as if they are the only vehicles on the road……crazy….  But Lindsay settled into the rythym and soon we were cruising through the pass like everyone else. 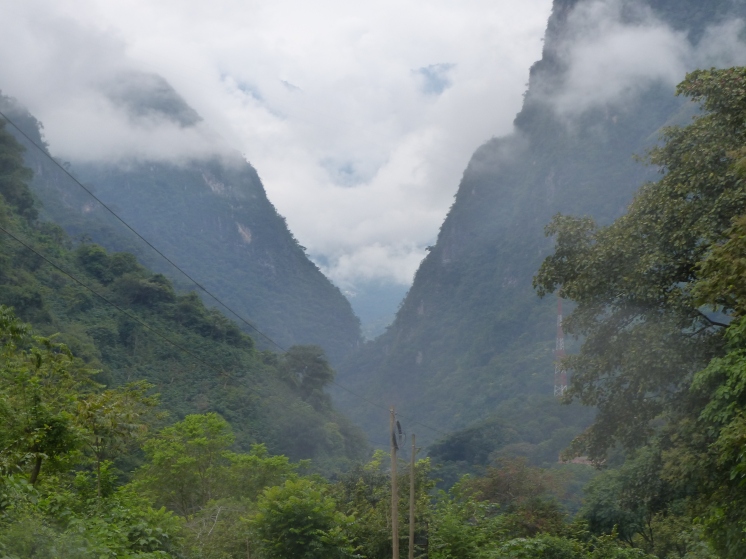 By the 18th we were in Antigua.  We stayed in a 500 year old hotel, the Candelaria.  The city is surrounded by three volcanoes…one of them active…..we got glimpses of them, but the clouds were around the tops most of the time.  Antigua is a very pretty place, and very cosmopolitan with many foreigners visiting, working or doing volunteer work.  It was Tom’s birthday while we were there and we celebrated by going out to Casa Escobar for a steak dinner. 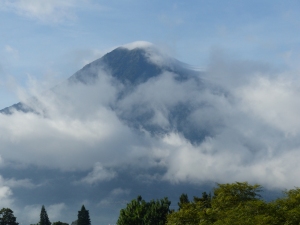 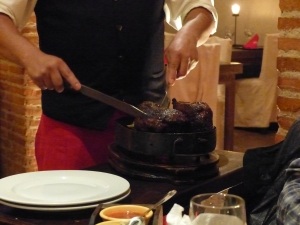 After another hectic border crossing from Guatamala into Honduras we were on our way to Copan de Ruinas.  It took us three hours to cross the border, again bringing the bike in was the issue….tons of paperwork….and again money changers, guys doing your paperwork for a ‘tip’, local bike insurance to purchase and standing around in the heat. Everything is done in duplicate or triplicate and carbon paper is the norm. Once you get through you are pretty much exhausted and dehydrated! Luckily Copan was only thirty minutes from the border.  Got there and with the help of Marvin the tuk tuk driver ended up at a great little  boutique hotel Yat B’alam.   It was now Lindsay’s turn to start feeling the flu coming on, so we took it easy for the rest of the day planning to take in the ruins the next morning.  Marvin arrived in the morning taking the four of us to the ruins in his tuk tuk. The ruins were spectacular and had a very natural contemplative feel being surrounded by beautiful foilage and wildlife, something that was lacking in Tithuacan.. 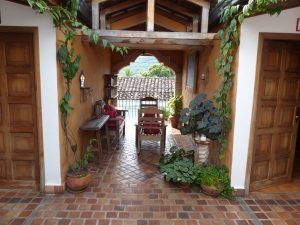 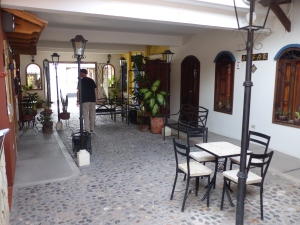 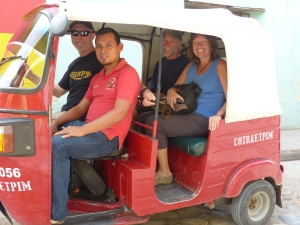 After spending a few hours at the ruins we packed up the bike and made our way to Gracias.  Again a busy little town with heavily cobbled stone roads, crowds of people and hot.  We found the hotel we had planned to stay at after getting directions from some school kids…..but no secure parking….so we ended up at a hotel down the road with a great courtyard for the bikes and a great restaurant for us so we didn’t need to go back out into the streetts again that night. 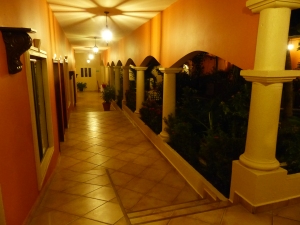 We basically drove directly through Honduras…..stayed a night in Danli…..got a hotel recommendation from an American coffee shop owner in the square….Hotel Casa Encantada….a nice place, very friendly owners…..and we also went out for dinner to the Hungry Wolf Café….same American recommended that….the café was owned by a fellow American that was married to a Honduran woman.  Turns out the café, like all the places around, shut down at 7:00……but Billy, the owner offered to make us hamburgers to go….which his wife ended up making for us (under duress)……we took the food back to the hotel and sat outside and enjoyed the best hamburgers…..The hotel owner had put together a small but eclectic collection of motorcycles, including a BSA Bantam, old Hondas and Kawasakis and even a Montessa and an Ossa which Lindsay and Tom had fun admiring and discussing with the owner. 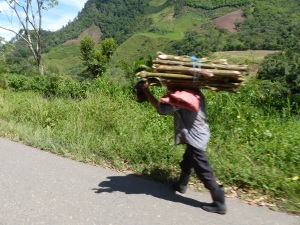 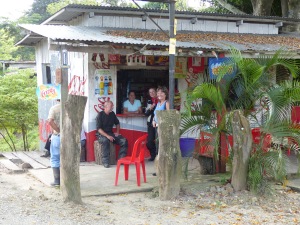 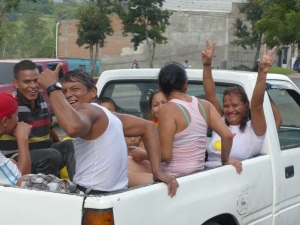 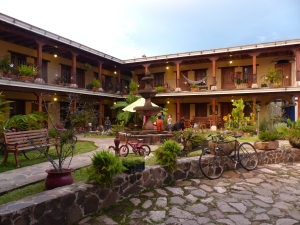 We left Danli for our border crossing into Nicaragua.  It was another three hour crossing with Lindsay suffering badly from the flu.  We had to get our temperatures taken, because of Chikangunya fears, to get into the country….luckily he passed!  Once we were through we were determined to make it all the way to Managua.  We had entertained the idea of stopping earlier, but none of the towns we came across felt very inviting.  So it was a marathon ride….luckily the roads were in beautiful shape, a huge change after the potholed Honduran experience.  About an hour and a half before getting to Managua the skies socked in and at 4:00 we were losing light…..then lightning engulfed us and the downpour started.  It was torrential, but there was nothing to do but continue.  Then night set in and it was almost impossible to see as our shields were completely fogged up and the rain was sheeting down on us. Trees had been blown down across the road and officials were guiding traffic by with flashlights.

Lindsay guided us along until we found a fast food chicken place where we stopped to regroup and grab a bite to eat.  When we stepped into the café everyone stopped to look at the four foreigners with puddles forming around them.   We took a few minutes to settle in and order some food then Lindsay started looking on the gps for a hotel nearby….as luck would have it we were minutes from the International airport with a Best Western across the way.  Needless to say, it was off to the Best Western.  By the time we got there Lindsay was at the height of his illness and really needed rest.  We had an appointment for the bike maintenance in Managua on the Monday, and it was now Saturday night.  So we decided to lay low at the hotel until the Monday giving Lindsay a chance to rest while Tom and Tracy moved on to Granada where we would meet up with them.

The bike maintenance experience started off badly as the address put into the gps did not work. After riding around the city in circles we were told that there are no street names in Managua, but rather districts or points of interest, the only thing we knew for sure was we needed to find Esquina Este Estatua Montoya….which apparently would be easy to find….not so much so for us……. Finally after two hours to go the 16km the dealer was located!!!! We had almost given up two blocks from the mark when we got a taxi to take us the rest of the way. From then on everything went according to plan with both the manager and mechanic speaking fluent English and being very friendly.  Mission accomplished.

Maintenance completed and we were off to Granada.  The ride there was  beautiful and the hotel Tom and Tracy had booked us into was perfect.  Right on the square, a refurbished historic building with a beautiful courtyard and remodeled rooms. We had dinner out at a sidewalk cafe and were entertained by street kids break dancing for the patrons.  It was very entertaining and I think they probably made a pretty good accounting for their efforts. 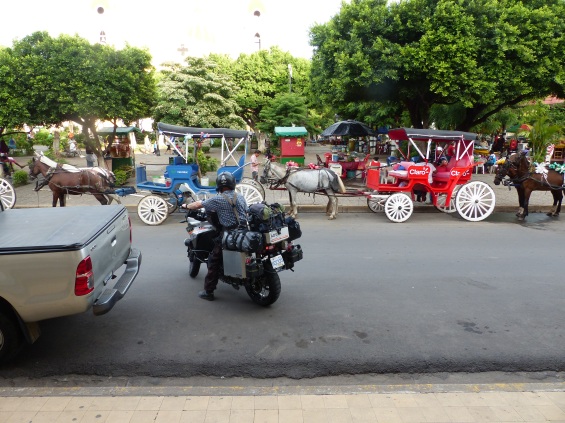 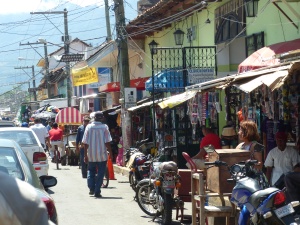 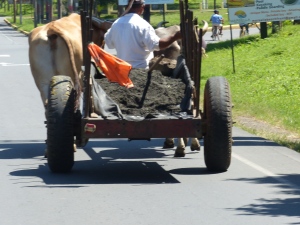 Left Granada and on our way to San Juan Del Sur Nicaragua.

← Nuevo Vallarta to Popocatepetl
What dreams are made of →